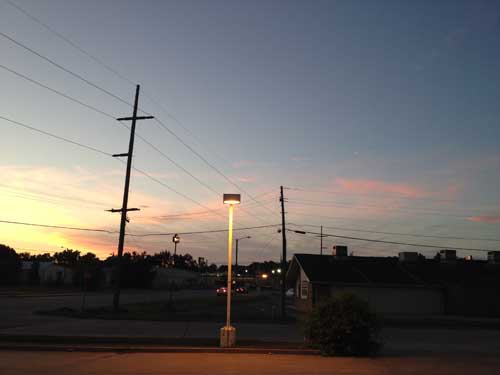 It wasn’t really news when Lanny announced to us that the tour was basically over during our morning meeting. The setup over the plains started to look more and more like summer weather leaving us stranded with absolutely nothing to work with. I am glad I hadn’t followed through with my plan to buy a one way trip later on in June and booked myself on a new tour…but, glad does not really represent the feelings I had.

I seriously started questioning this whole passion of mine. Despite one really awesome day on my 2nd tour, I have had so many down days and bust days during my last three tours. Although one good day could make up for all of that (as was the case on my 2nd tour), it is difficult to keep my spirits up after so many unlucky days.

But, I know myself. Storm chasing has a lot of similarities to being a sports fan. You spend money, time and devotion and get let down season after season only to experience those moments of perfect bliss when everything comes together. I remember discussing this at my psychology class since these psychological mechanisms are highly addicting. It is the same mechanisms that you will find in gambling etc. as well. So, I guess I will be back for more punishment next year as well!

Following the path of the El Reno tornado of 2013

Anyway, we continued up north to Tulsa and made a stop at El Reno where the monster tornado of last year killed five storm chasers, including the well known chaser and researcher Tim Samaras, who also was a good friend of our tour guide Lanny Dean. The El Reno-tornado was the largest tornado ever measured being over 2.7 miles wide with sub-vorteces inside and outside the tornado itself.

We followed the same gravel road and the path of chasers Dan Robinson and Tim Samaras and his crew with Lanny vividly explaining the events that occurred. He was himself not very far away from the gravel road where Tim and his crew so tragically got hit and where Dan Robinson had his narrow escape. Deducting from videos, talking with Tim just before they got hit, the audio from Tim’s own camera that was found, and other findings after the tornado – Lanny has a good idea of what is likely to have happened.

Listening to Lanny explaining the events really got to me. We were standing on this beautiful gravel road, surrounded by slowly swaying wheat fields on this hot summer day with almost clear blue skies.  It was, however, not difficult to picture the events that had occured. I remembered clearly the size of the tornado and the sights from Dan Robinson’s video from that day. I could almost picture driving down that road that day, with almost zero visibility and with that monster hunting you from behind.

Above is an awesome analysis of the El Reno-tornado made by chaser Skip Talbot. Skip is awesome in explaining storm events in an educational and understandable way. I had the pleasure of meeting him quickly in Texas this Monday and have him to thank for a lot for my knowledge on storms through his forum responses on StormTrack.

This emotional story also led to an interesting discussion about risk and how having bad days affects your risk judgment. After experiencing too many down days and also knowing that you won’t have anything good coming in the near future, I know it at least gets to my better judgment. Basically, if you look for tornadoes for a week, having bust after bust and seeing tornado warned cell after tornado warned cell go by without producing anything – I start to think that a tornado warned cell is not really something to be worried about!

I know, from a rational point of view, this is not true but after a week like this I would not be terribly terrified having a tornado warned cell approaching me. For this reason I find it quite good to be a part of a tour and having a tour guide that would not have this “down day risk bias”. I was even in an argument with Brian Morganti about this on my last tour, for which I am quite ashamed as of today.

Coming back to Tulsa

We arrived back in Tulsa quite late on the Wednesday evening and got a pleasant surprise. The reason for the weather being bust was the total absense of lift in terms of fronts or boundaries. But, apparently a storm in Kansas this afternoon had created an outflow boundary that potentially could create this lift and potentially create a new chase day, almost literally out of the blue.