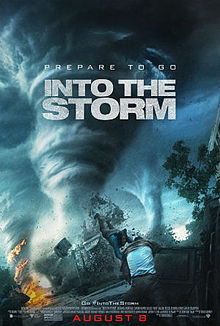 I was helping out the production company a bit on the PR of “Into the Storm” here in Sweden and was supposed to have seen the press screening of the movie. I missed out on that one and instead saw the movie some 10 days later. By then, I ended up in a nearly empty theater – apparently it wasn’t doing too good in the box offices!

My expectations of the movie were low, I had not read any reviews (on purpose) but I had seen some ratings and knew I would not get pleasantly surprised by it. All I wished for was to see cool action scenes with tornadoes and other storm related stuff…

…well, that’s pretty much what I got.

When I started writing this review I tried to explain the “plot”, the characters etc. but I’ll make it brief: This movie would have done so much better without actors in it – or if they would actually have had actors in it!

Obviously, you need to have a plot and characters to follow but a major mistake of “Into the storm” is that they believe they actually brings something interesting to the movie – they don’t. Why not accept the fact that the tornadoes and the storms are the main characters of the movie and let them get more screen time?! The actors are bad but it’s the script that really makes large portions of the movie almost unbearable.

So, the plot sucks. Now, what about the tornado action scenes?

I didn’t clock it, but for being a storm movie it takes forever (25 minutes?) before some storms actually starts to appear (outside of the opening scene). Once they do, it is mostly a feast for the eye though. The CGI and sound effects are great most of the time!

So, I was even pleasantly surprised by the tornado scenes but I would have wished for far more of them. They acknowledge the hail of the storms but don’t use it for anything. I mean, a scene with grapefruit sized hail in strong side winds could have been really intense and showed some other cool feature of storms. They also miss out of the opportunity to show how scary mothership storm structure could look like, it’s just dark skies all over.

That is pretty much the whole problem of the movie. It is a movie about storms, for people who are fascinated by or scared of storms but it keeps coming back to scenes with full attention to the “actors”. Since the actors don’t manage to put a single drop of life into their characters you don’t care what happens to them – and I end up hoping the tornadoes would suck them up sooner, rather than later.

How realistic is “Into the storm”?

In order to determine how realistic a movie is one has to put it into a “movie logics” perspective. Realistic and likely is not the same thing, and shouldn’t be either. As long as a movie depicts things that could happen, it’s fine. A movie doesn’t necessarily have to follow external logic (“would that even be possible?”) as long as it sets its own rules, but it must follow those rules and its own internal logic (“if this thing is possible in this movie, then that would happen as well”).

Considering that, these are a few of my comments about how realistic “Into the storm” is.

See also this interesting Off Topic-discussion going on at this thread at Storm Track about how (un)realistic “Into the storm” is.

Well, finally. Is it worth seeing “Into the storm”? If you are fascinated by storms, then I would say yes. The action scenes makes it worth it and those should be viewed in a movie theater rather in your DVD-player at home. What I wish now is that they fire the writer, the actors and the editor of the movie while keeping the special effects team and create an “Into the storm 2”!