After a slow March it seems like the atmosphere is starting to turn beneficial for severe storms. Today is a Moderate Risk-day for a large area in the Eastern plains with a 15% risk of tornadoes in Northern Arkansas / Southern Missouri. Although this might be really bad chase territory (hilly and lots of trees, as far as I understand) you can expect lots of storm chasers to converge in this area.

I was following the events of yesterday (Slight Risk-day) on my newly purchased RadarScope-app and TVNweather webcameras, which was pretty cool – especially following the web cameras with audio. The time difference between Sweden and the USA took its toll and I couldn’t stay awake even after the storms started popping along the Oklahoma / Kansas border.

I hope the storms will start early today so I can stay awake and do my first real “armchair chasing”. If you want to do some armchair chasing you should probably check out these resources: 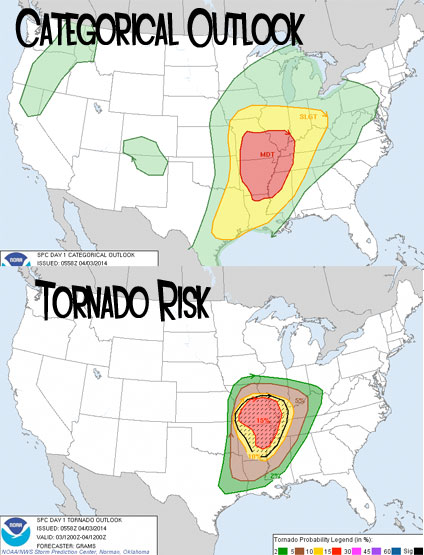 Please provide your best “armchair chasing” tips in the comments!