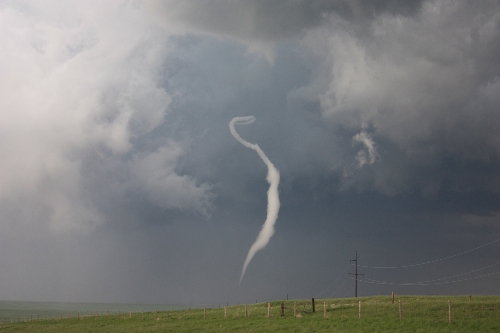 Yes, today we finally found a tornado â€“ and what a tornado!

Everything looked pretty good in the morning, the first storm we were going for to seemed to have all the attributes we want: a low wall cloud, strong rotation and large hail.

We come out just in time to bring out our cameras. The storm, shortly thereafter, starts to create a funnel cloud. The funnel, however, retreats back into the cloud. At the second attempt it reaches all the way down – it is now a tornado. The tornado grows rapidly and soon becomes a few hundred meter wide beast. After a short while we end up in the path of pea-sized hail and start to regroup ourselves.

During our repositioning the hail storm grew to the order of golf balls. The car was then actually under a rain of ice balls as big as golf balls! The noise inside the car was crazy, when the hail hit the roof, windows and wind shield.

We set off to the next point where the tornado had more of a rain cloud around it which slowly rotated and simultaneously made the tornado a little bit difficult to see. We drove further out on a road that was bordered by dozens of storm watcher cars. By then the tornado was heading straight at us from the right. I wanted to stop but did not really get an approval from the tour guide :).

Finally, we positioned ourselves on a small plateau where we had a great view of how the tornado roped out â€“ the last stage. We were lucky enough to have the sun in our backs which made the tornado completely white. A fantastic sight!

And this was just the beginning of the dayâ€¦