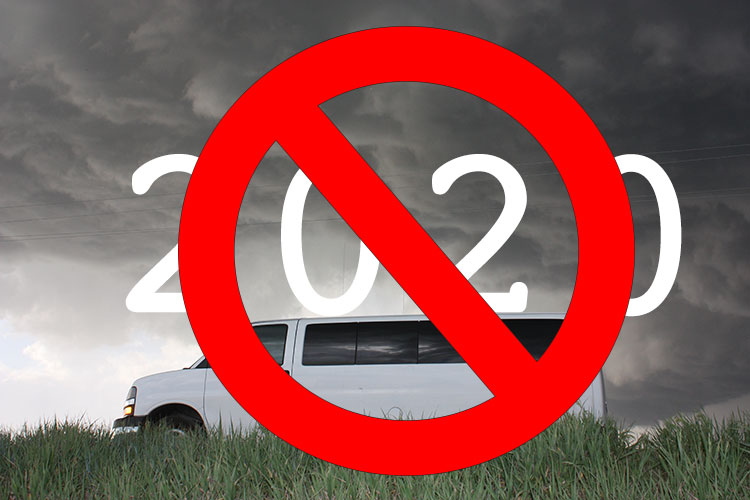 In the advert of the Covid-19 outbreak I was still expecting to chase (albeit with some difficulties) but ever since the US closed the borders for travelers from Europe in March, I have known that the chances for me chasing this year has been slim. The borders were, at first, closed for 30 days but the travel ban was prolonged in mid April and by that time I had no real hopes left. Last week, my flight was cancelled, putting the final nail in the coffin of this season and I canceled my seat with Extreme Tornado Tours. My 2020 Chasecation was officially off.

Cancelled flights and closed borders obviously put an absolute obstacle to chase but even if that wouldn’t have been the case there would obviously have been many other strong, real reasons not to go as well as ethical ones.

One of them was that I was relying on my kids grandparents to come and help out my fiancĂ©e with the kids when I was gone – and that wouldn’t have been possible as they are all 70+ and in the risk group. Leaving my fiancĂ©e with two small kids and a household for 8 days alone would have been a very hard call.

Even if that would have been solved I would have been stuck with other very difficult questions. What would happen if I got sick with Covid-19 while chasing? There is a current official warning from the Swedish Foreign Ministry about traveling abroad at the moment. This affects travel insurances and although I never looked into it, I cannot imagine my travel insurance to cover any medical treatments with that official warning in place. So, in a worst case scenario where I would need emergency care I would have to pay any medical bills straight out of my own pocket which would obviously be ridiculously expensive.

In a reasonable scenario where I would only get “normal” symptoms without needing to visit a hospital, I would still have to stay for at least two more weeks in a hotel after I was symptom free before any airline would have me on a flight back to Sweden again. That could have been 2-4 weeks of hotel nights and food delivery, which would have been very expensive as well. It would have been really painful for my family at home as well.

…and I have not even gotten into the ethical reasons yet!

I know there have been some really strong discussions, mainly on StormTrack, about the ethical implications of chasing this season. Chasing the Plains is probably a whole lot safer than most other geographic locations around the US but still. You are a possible vessel of Covid-19 (whether you have symptoms or not) and as a chaser you are bound to use restaurants (possibly only takeaway, but still) and hotels. You will stop at gas stations and you will get into the (contagious) vicinity of locals all throughout the Tornado Alley states. In a worst case scenario one could be the “Patient Zero” in small towns that would otherwise have been unharmed by Covid-19 (at least for now). If you are the ones getting a whole tour infected you would also automatically add a lot of stress to small back-country hospitals as well. Places in hospitals you shouldn’t have to occupy.

Then, there is the added danger of bringing the virus back home to my family and neighborhood as well. Even if I get the virus on the flight back home and don’t spread anything while chasing I would still possibly risk the health of my family and friends.

Lastly, and in fact, this is actually my least concern, is that if I would get the virus myself I would be in for a possibly terrible disease.

So, in a way, I am thankful that there are absolute obstacles for me to chase so I don’t even have to consider the ethical or even practical ones.

The emotional part of not chasing

Having said all this, there is an emotional part of not chasing this season that is very painful for me. I have been chasing every year since 2012 and it has become a part of my yearly routine in a way. I cherish these trips so much and it is truly the highlight of my year. I start longing for them for real in January, and the feeling gets stronger every week after that. With one month to go, I am having a hard time focusing on anything else and as self employed I switch to “tornado season”-mode and just update my forecasting skills, test my cameras, write blog posts etc.

Anticipating the season is almost half the enjoyment to be honest. There are so many things in the Spring at home that reminds me of the upcoming season: moisture in the air, cold windy mornings, seeing an airplane in the sky, certain types of food, and of course by all the storm photos I have in the house! I get reminded 5-10 times a day and with an upcoming chase this puts a smile on my face in every situation. I love that part.

In the current situation, with no upcoming chase, these reminders are instead transformed into painful micro-revelations of my cancelled trip. I feel the smell and get that positive reminder for a tenth of a second only to *record scratch* realize I won’t be going this year. I hate it and it puts a damper on my mood many times a day, and more the closer my former departure date gets.

What makes matters worse is that I really needed the vacation as well. Renovating a house with two small kids at home, and having basically not left the house since October (when we got our daughter Liesel) and now with the added boredom and constant negative news concerning Covid-19, the upcoming storm chasing season has been my breathing hole. I have hardly every needed a vacation this bad as this year.

Still, I know a lot of places and a lot of people have it a whole lot worse. People under strict quarantines, people with loved ones dying, people losing their jobs, people who work in the health industry etc. I know it is unfair to all of them to whine about what could be perceived as “a missed vacation” and, all in all, it IS just a missed vacation. If this is the biggest sacrifice I would have to put up during this whole Pandemic, I know I am lucky.

I hope I will be able to chase next season although it could prove to be difficult. Many tour companies who cancelled this season are transferring their guests to next season, so it could be a very fully booked season early on. Perhaps 2021 will be the first season I finally go to chase myself?