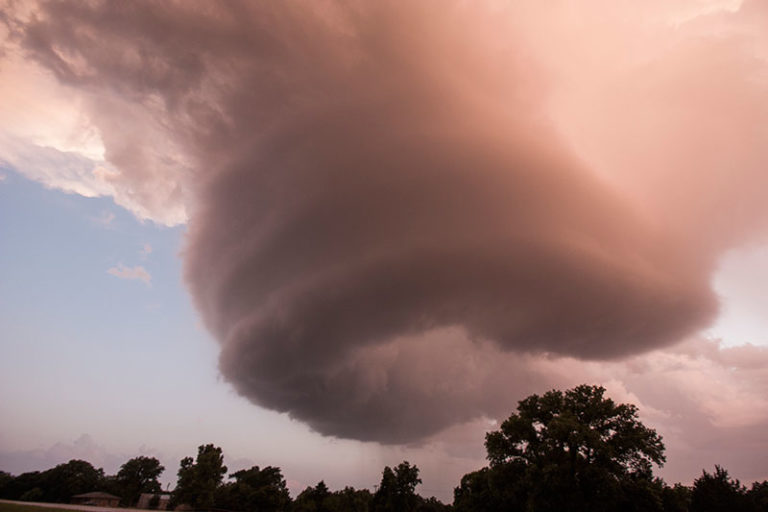 As today was a very marginal day we chose to really sleep in and catch up on some work. We didn’t leave Lincoln, NE, until after a nice lunch at Ihop and headed east towards Topeka, KS, to play the dryline again. The dewpoints and temperatures were super high so it was almost painful to be outside. I also had quite a headache and nausea so I was not too involved in the events of the day.

Although we had some towers going up just after noon, the subsidence was keeping a lid on all convection throughout the day. For yet another day we played the waiting game and eventually gave up at around 6 p.m. and started heading towards our hotel in Wichita. We knew from the radar images that there was a small storm south of Wichita but it was not a supercell and we did not really expect it to be there when we arrived.

The cell however stayed put so we thought we could core punch it for the fun of it and maybe experience some small hail. As we started nearing Wichita the storm started to grow and started to rotate and eventually became a supercell, to our surprise. Having been too far away from tornadoes on several occasions we decided to head under the meso directly. As it turned out, the structure of this supercell was the best I have ever seen. The pink hue from the sunset, the striations on the mid-levels and the horse shoe shape of it all just made up an incredible structure.

As we were standing underneath the meso the storm produced a small funnel. As the storm was relatively high based it was nowhere near a tornado but we would have had a perfect spot to see a pink tornado from less than a mile away!

When we left, the storm started dissipating but another one grew up just next to it. At this point it was already dark and although we stayed close enough to see any potential tornadoes we mainly went for structure and lightning shots. This storm turned out to be incredible as well, and we continued on dirt roads in the dark to chase it. In fact, we could almost have walked as the storm barely moved.

In the end, we were positioned on a small road outside of Mulvane, KS, that was the scenery of the best tornado photo ever shot (Eric Nguyen). It was one of my best storm chasing experiences ever. It was nice and warm, pitch black and we had the storm producing a spectacular lightning show in front of us. Behind us the skies were clear and filled with stars and on the fields around us there were hundreds of lightning bugs lighting up the fields. In the end I turned off the camera to enjoy the scenery, only looking at the stars and the lightning bug filled fields.

That feeling, right there, was quite the opposite of the adrenalin and excitement filled day in the Nebraska panhandle. Instead, it was such a calm, overwhelmingly peaceful experience that I will never forget.