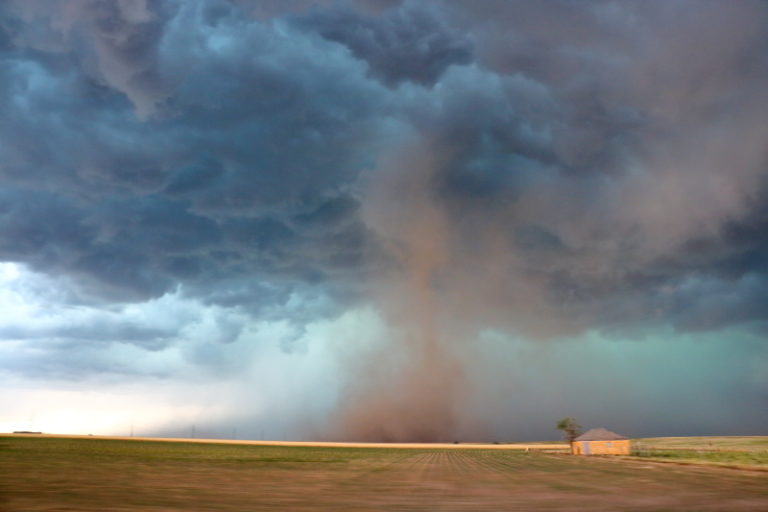 I woke up with a nice, peaceful feeling from the day before. Storm chasing is at its best when you can stand and watch a slow moving storm and take good time to take photos, enjoy and plan ahead. I really loved that!

That nice, peaceful feeling came to an abrupt halt when we realized we were a bit behind schedule and the storms firing up near Hays, KS, was instead ahead of schedule. We were about 2.5 hours away from Hays when we saw the first signs of towers going up there and we had to put a speed on. Although the chase terrain in south central is remarkably flat, the haze in the air made it difficult to see more than 20 miles ahead. The first cell stood isolated and rotating for quite a while and was tornado warned as well during its first hour, while we were speeding towards Hays. At this point it was really exciting and we were super focused on getting there in time.

Once we finally reached the storm, however, it seemed to have become weaker and we chose to go with a cell that was popping up to its west. As we drove by the storm a really cool gustnado appeared at the leading edge of the storm, more or less a few hundred meters right of us.

That turned out to be the best thing of the day. The next storm did not do anything and we decided to core punch the storm to see some large hail but found only rain. We considered going back to the front end of the first storm to at least see some nice shelf clouds and possibly a bow echo tornado but decided to play the odds of the dryline having storms popping up.

To be honest, after this point I stopped really paying any attention. The storms were all in a big mess, cutting off each other and I pretty much just stayed in the car playing games on my iPad. Still, we decided to see what happened when four boundaries met but that proved not to create anything special.

To finish off this slow afternoon we got a flat tire while driving back to Dodge City! Outside of the really cool gustnado, this was not one of my best chase days. Off course, you can’t have great chase days all of the time.