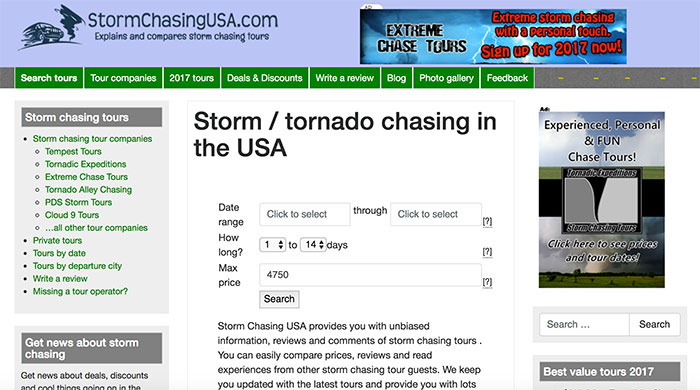 When I first made StormChasingUSA.com back in 2009, it was not a pretty website but quite useful from the start. It was made in php with a lot of “cut and paste”-coding that made it buggy and without any really useful tools. A couple of years later I made a complete makeover of it, with a new version made with Ruby on Rails. That allowed for a lot more functionality, like an admin area etc. For the third time now, the website is made more or less from scratch in a new environment. This time in WordPress.

There are numerous reasons for going to WordPress. Since I made the CMS in the previous version more or less myself, I had a lot of bugs that were really tricky to solve and it often took me ages to solve. There are far less programmers specialized in Ruby on Rails as it is in WordPress so moving to WordPress makes it much easier for me to outsource, which in turn will make updates faster.

In addition, it will make it much easier for the tour companies and others to update the website with info on new tours. It was quite a mess in the old website so I hope this will make the website updated more often.

I wanted to publish this new version before I go chasing on Friday so I had to cut some corners, mainly in terms of tour company logins (not existing at the moment) and web design. The design is somewhat worse, for now, compared to the old version but it will soon be much improved. It is a “one step backwards to take two step forwards” kind of deal.

I hope you will enjoy the new version. Please let me know if you encounter any problems with it!