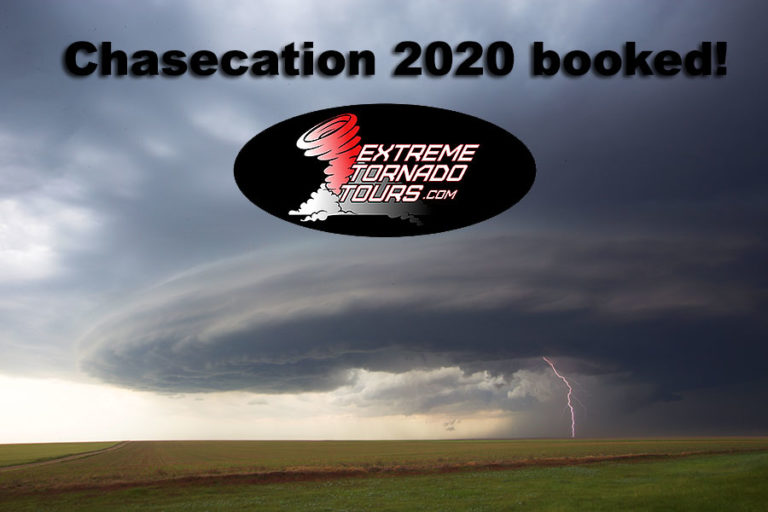 I am very happy right now. I have just finalized my registration and bought a plane ticket to OKC in order to chase with Extreme Tornado Tours this season. For a long while it seemed like it would not be possible as I have a two year old son and a 3 month old daughter back home that are a handful to take care of. Thankfully, my lovely fiancĂ©e agreed to let me go chasing again (and take care of them while I am gone). I know a lot of chasers are having the same issue and many just don’t chase during the years the kids are this small.  It is also likely my last chase for a while so I am really glad I am able to go.

In addition, I am excited to go with Extreme Tornado Tours who I have been very much in contact with since I started StormChasingUSA.com in 2009 and is considered one of the largest storm chasing tour companies in the business. I was on the same path and storms as Nick several times last year and we had a long chat. The photo in this blog post was take while ETT were standing just in front of us near Goodland, KS, so I assume Nick has a similar shot of it.

This tour (Tour 4) between May 9th and May 15th will also be my first chase in mid May. I have chased early May once (2013) and once between May 20th and May 25h if I remember correctly (2012). Both were pretty much failures weather wise so I started chasing later in May/early June after that. This also came natural when I started to chase with David, who starts later in the season.

Although the dates in which one chases is subjected to chance one thing is a bit more certain: it is more likely I will be chasing further south than in previous years. I have seen some 30+ tornadoes in my 9 years of chasing but I have still never seen a tornado in Oklahoma, which at least is a bit more likely in mid May than in mid June so I am keeping my fingers crossed about that.

Nonetheless, I am so happy to have a chasecation to look forward to and I am just happy to have the chance to chase one more year.