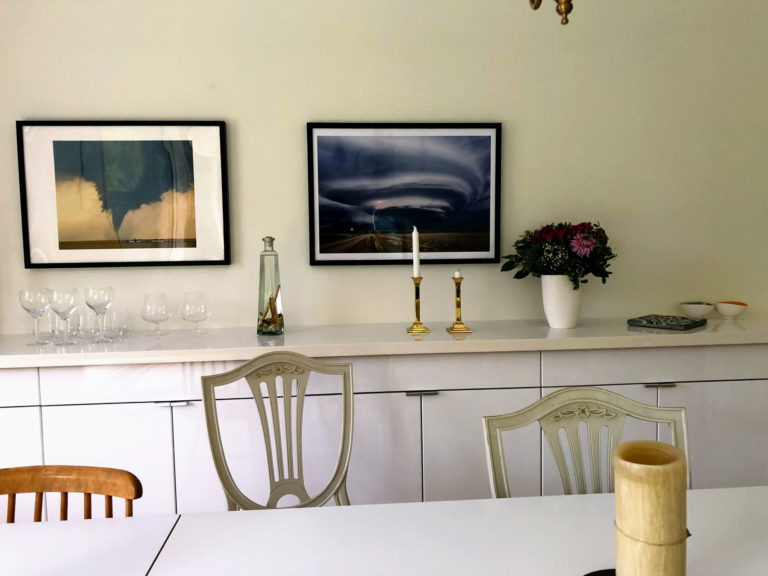 Last year I finally came to print my first storm photo. It was my shot of the first tornado on the Dodge City, 2016, outbreak. It was one of my most significant photos as it was my best chase day, one of my best photos and it also included a few storm chasers in the foreground (which happened to be Tempest Tours). I loved to have that framed but I framed it in a cheap IKEA-frame with some plastic in front of it – and it just doesn’t look good.

I recently got my best storm photo ever printed (Goodland, KS, storm structure with lightning and a tornado, center piece in the photo above) and this time it was for real. Good paper quality, great print quality and a proper frame. It made my last print look really bad next to it so I am planning to print two more, one on each side of it. I am having a hard time deciding which ones though. Would you mind helping me out?

The following photos are the ones I am deciding about. The right ones are shown on our (amazing!) Samsung “The Frame” TV (with the cable photoshopped away, hehe). I love the art feature on that TV so much and will probably dedicate an entire post about it later on!

I have already to 95% decided about going with the Goshen County, WY, 2009 tornado (white lasso tornado) but I am not sure if the image quality is good enough for a 50x70cm print. Wyoming, June 2017. The first tornado that started in Colorado and went into Wyoming. This supercell went through 4 states and had tornadoes in three of them. The foreground shows a cattle farm. Dodge City, 2016. The one I already have printed. I love the photo but the colors are a bit dull to have framed by the dinner table. Also, I already have a print of it and it would feel a bit stupid to print it again. I don’t know. Goshen County, 2009. The one I pretty much already decided about printing. My first tornado (!). The colors and the spectacular shape makes it an easy choice. Wichita, 2017. A supercell that we didn’t see coming at all and for some brief 5 minutes put on an amazing stacked pancake shape by sundown, making it all pink. My only concern about putting it next to the center shot is that both are storm structure photos. Nebraska, 2018. A bust day that ended in the best mammatus fields I have ever seen. Colorado, 2019. The same day as the center photo already printed but a few hours earlier. I like the slender look of this landspout. Nebraska, 2016. A complete down day, just for the heck of it we went chasing rain storms and I managed to squeeze out this photo. It is my fiancĂ©e’s favorite photo. I like it but hardly consider it a storm photo. Lots of nice colors and details though.

Which one is your favorite? Which combination of photos do you think would work best?