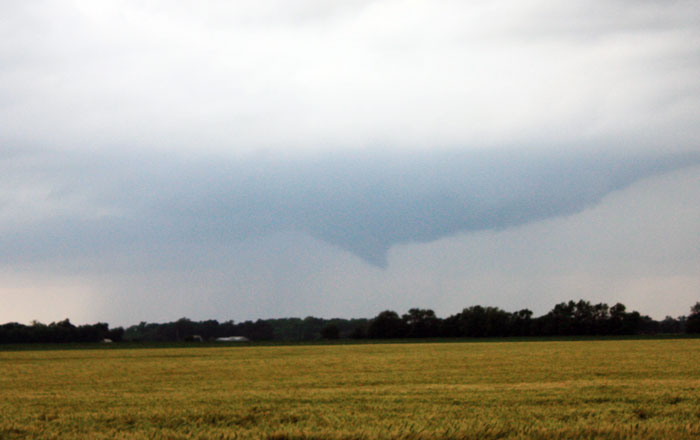 Just as last year my neighbors decided to have a party the night before my trip and I had to get up at 4.30 to catch my plane! That, and being a bit nervous to oversleep made me sleep only one hour the night before. I slept on and off during the flights over to Tulsa but I was a bit of a wreck when I arrived.

After reading some discouraging news on StormTrack regarding this week I decided to stay away from all types of news about this the forecasts of this week. It was too demoralizing to read it after having had two bad tours in a row! I was pleasantly surprised instead on the first day of our chase to find out it was actually a Moderate Risk day! The moderate risk was mainly about flooding and was issued for Texas. Texas also had a 10% tornado probability the best I have seen while chasing.

Outside of the flooding, the storm system coming to Texas was a fast moving Mesoscale Convective System and would be very difficult to chase. Instead we chose the other area of the day – Central Kansas. I prefer chasing in Kansas so even though there was a slightly less chance of tornadoes (5%), actually seeing them would be a bit easier and the storms would likely be more organized.

It started off really well when we got into a hail storm already at 4 p.m. Soon thereafter Lori shouted “Is that a tornado!?”. Well, it wasn’t but it certainly was a funnel cloud. It was quickly rearranging itself and only had a very brief period when it looked like a classic funnel cloud. Later there was a reliable report of a tornado on that storm and it was likely during that time. I wouldn’t dare mark that as a tornado but it sure was exciting – and on the first hour of the tour!

We regrouped to get a better vantage point but while doing so the storm became unorganized and the different storms congealed into a big mess. It became obvious quite early that there was nothing left to chase so we called off the chase already at 5 p.m. At that time I was falling asleep back and forth in the car so I wasn’t too bummed out. After having a pizza in Pratt, KS, I was finally able to go to sleep.

Day 1, thus, was a very short chase but at least we saw a funnel. Still, the feeling after Day 1 was a bit of a disappointment since this promising start led to nothing else…