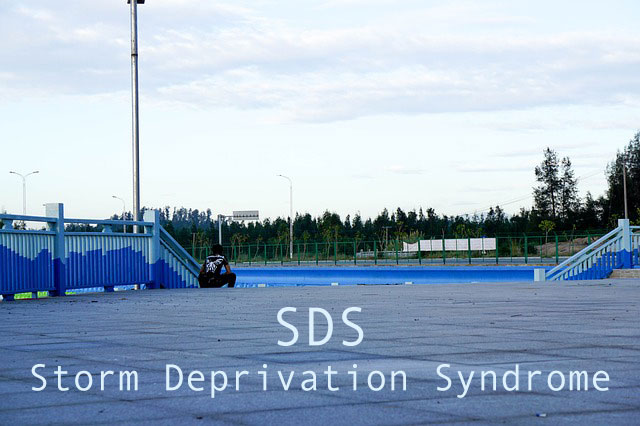 Storm Deprivation Syndrome (abbreviated SDS) is a anxiety syndrom that mainly affects storm chasers when there are no storms to chase for an extended period of time – typically in the off-season.

SDS is very rare in the general population but is greatly prevalent among the demographic group of so called storm chasers – especially during the winter months (especially November through February). The symptoms tend to strengthen throughout the off-season (i.e. season of no severe storms) in the USA but can happen at any time of the year – even during storm chasing season if the person happens not to be in the proximity of storms.

Men and women are equally sensitive to the syndrome but age seem to have a small negative correlation with the strength of the syndrome.

SDS is known to cause symptoms such as:

SDS is not particularly contagious in the general case. It has been shown in laboratory studies to be neither air-borne nor contagious through the exchange of body fluids (it is generally considered safe to kiss a storm chaser with SDS without risk of acquiring the syndrome). Contrary to popular belief, you cannot acquire SDS from using a public restroom, even in Hooker, OK.

SDS is however suggested to be contagious, to some extent, over social media platforms. One host (who may or may not be affected) could through a particularly amazing video, interesting forum post or inspiring tweet cause SDS in multiple followers. There is an ongoing discussion about the causality of this effect, i.e. if the post or forum thread is causing SDS or if people affected by SDS frequent these posts to a higher extent than the un-affected population.

There are no known long-lasting cures and no vaccines have ever been found to have lasting effect.

Typically, most remedies that involves succumbing to tornado video binge-watching have a short-term positive effect and a medium to long-term negative effect. In other words, one may get a symptom relief while watching but the SDS will come back stronger in the days or weeks to follow.

Alcohol have shown promising results in some studies but the research is not conclusive.

Cryogenic freezing until May is a controversial subject that is yet to show promising results.

“Ye who feeleth an un-holy and fiery urge of pursuing tempest before the rye has sprouted // shall stand in the first rain of the month in thou mere knickers to soothen and ease the spirit // as ’tis but a humdurgeon”.

What you can do if a loved one is affected