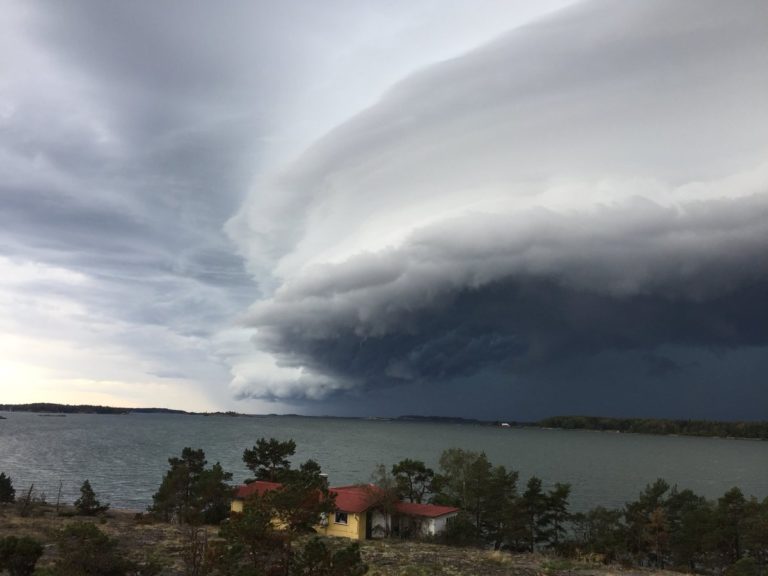 Sweden (where I live) is not very prone to have tornadoes. At all. We never ever have big ones and most tornadoes, if they appear, are usually water spouts coming ashore. In mid August we had a bit of a “tornado outbreak” here in the south of Sweden. Now, this is a tornado outbreak in Swedish terms meaning “several tornadoes and water spouts in one day”. I did not see any of them at all but I experienced one MCS-type of thunderstorm with an impressive shelf cloud outside our summer house on Ă…land (which is an island between Sweden and Finland). It was, by far, the best storm I have seen in Sweden/Ă…land in my entire life. It would have accounted for a rather decent day while chasing in the USA!

I lucked out in catching a lightning with the slow motion feature on my iPhone during the incredible storm over Ă…land islands (Mariehamn) last week. @severeweatherEU #EUwx pic.twitter.com/gSej9BKyqg

I left the summer house the day after and a few days later the rest of my family saw these twin water spouts from the exact same spot (but more to the left, and further out). Photo by my brother in law Richard and is friend Hampus:

This tornado was very close to an area we are about to move to (HĂ¶llviken) and I could almost literally have seen this from the porch in that case. Quite cool rope tornado!

I believe this is the same tornado, but it could be another one from the same day

This tornado was near a popular beach and there were several photos of it on social media. In one you could see rotation on the ground so it was, in fact, a tornado.

The most impressive photo of the day. Three water spouts in different shapes outside of Karlskrona in the south east of Sweden. A friend of mine saw these as well.

Water spout outside of the island of Gotland in the southeast of Sweden. Check out the height of this cloud! That is, the lack of height. The water spout stems from an incredibly small cloud.