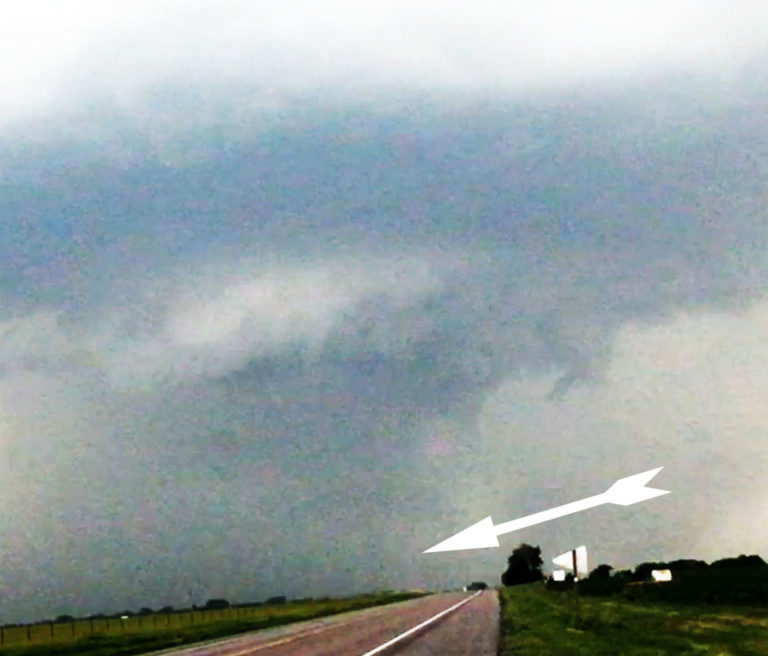 Earlier this year I started a thread on StormTrack about how to count tornadoes seen. I have a spreadsheet on my computer where I list the tornadoes I have seen, for my own personal sake and nothing else. I usually don’t post or brag about how many tornadoes I have seen but I do find it interesting to keep score. At first it was quite easy but after a while, especially after Dodge City 2016 it became very difficult – especially since I didn’t really keep count that day. Last season (2017) was also a season of many ill-defined tornadoes that I didn’t know if I should count or not.

1. The Dodge City second meso (in the beginning) that spawned multiple vortices. At first I thought I saw “3-4 tornadoes” (1 to the left, and several to the right) but in the discussion afterwards I learned that the multiple ones to the right were just one tornado, but a multivortex one, since they were under the same meso. I wonder though, I have seen multivortex tornadoes (such as the one later that day) and it always looks like a wedge with fingers rotating around the circulation. In the second meso of Dodge City, they looked more like rope funnels that stayed put, if only for a short time. In my record, I put these down as 2 (1 to the left, 1 to the right).

2. Tornadoes that stem from the same mesocyclone which drops a tornado, holds up for about 2-3 minutes perhaps with the same lowering/funnel and then creates a new tornado. An example of this is the Dodge City outbreak when that MASSIVE wall cloud first spawns a multi-vortex tornado that is never fully condensed, it then holds up for 2-3 minutes before it drops the barrel tornado.

3. Tornadoes in storms that you are watching but where you cannot distinguish a tornado while watching.

This could also be cases where you enhance photos when you come home you can see you were in fact looking at a tornado or you hear, through reports, that there was a tornado at that particular time. Usually HP or perhaps night time tornadoes. Included here could also be the off case in which you actually managed to photograph a tornado but did not in fact see it.

Water spouts can happen under non-supercellular storms if there is just some shear. I am not sure where the limit goes when a water spout would go under the same definition as a land spout tornado but I believe most water spouts do not count as tornadoes, no matter how amazing they are!

5. Land spouts – By definition – land spouts are tornadoes so they should be counted as such.

6. Tornadoes of which you can only see a portion (i.e. the top part) and cannot confirm by yourself that it is actually touching the ground, but through SPC or other chasers can confirm it was in fact a tornado.

7. Tornadoes of which you cannot distinguish visible rotation on the ground (perhaps because you are too far away) but you can see a funnel “pretty much” all the way to the ground. No confirmation by other chasers or SPC. Usually this applies to spin-ups and short lived bird farts.

9. Questionable funnels and tornado like-features. I never brought this up in the thread as I am sure you do not count this as tornadoes. Just for the sake of it, I add it here in the blog post. This is a reference to all weird features you can see that may, or may not, be tornadoes.

This is just an interesting talking topic among storm chasers and I don’t really care too much about it but please leave a comment what you think about these examples above!