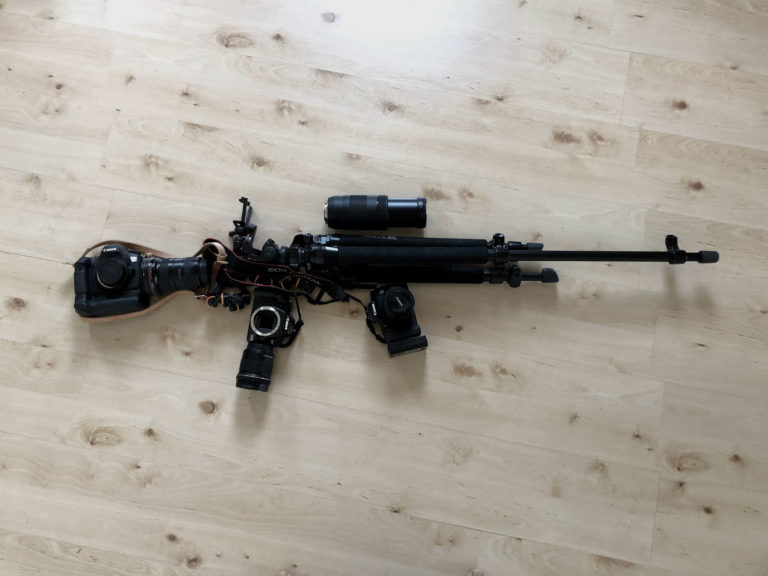 My first two chases I had my Canon 450 with the pre-packaged 18-55mm and an old pocket camera for video. The stills from 2009 and 2012 are rather decent but the videos I got are absolutely useless.

In 2013 and 2014 I borrowed my sisters Sigma 70-300mm telescope lens but as there were no real storms those years it didn’t really matter what I brought, with one exception. The super brief Big Spring, TX, landspout tornado shot was shot with that telescope lens and I was just lucky I had that lens on at the time. I also bought a real (but sheap) handy-cam to shoot video with, from Wal-Mart. Not the best but it was far better than my old pocket camera.

For 2015 I used the same setup, still going with my Canon 450, the standard 18-55mm as well as my sisters Sigma 70-300mm. I brought the video camera as well but as I rarely had my hands free to film with it I only got film when I got other tour guests to film for me. My newest addition this season was a GoPro which I used mainly as dash-cam which proved to be a nice addition.

It was not until the chase season of 2016 when I upgraded for real. I bought a Canon 760 (with which I could also film), a wide-angle 10-18mm, my own 70-300mm telescope lens (as my sister had now sold hers), a new go to-lens: 18-135mm as well as a sturdy tripod. This turned out to be a timely upgrade as the 2016 season turned out to be my best so far including the Dodge City tornado outbreak etc. The tripod turned out to be extremely useful that day as I could put my 760 on it filming while I was taking (wide angle) stills with my old 450.

This was the exact setup for 2017 and 2018 as well. The old 450 was my backup camera, that I used mainly for storm structure or when the 760 was busy filming. The GoPro caught some amazing lightning etc but was/is problematic as its video files use a lot of disk space.

For this season, as mentioned before, I have upgraded again by purchasing a (used) Canon 6D with a (also used) 16-34mm wide-angle lens (pretty much equivalent to my old 10-18mm). I have done this to mainly improve my storm structure shots which, in the end, often are the ones I like the most! I also want to be able to photograph better in low-light conditions, which has been a problem with my other lenses. This year I am retiring my 10 year old 450 and leave it back home.

I would like to upgrade my GoPro soon as it is impossible to know if it is on when it is mounted on the wind shield with the LED turned off (which is needed as the light gets reflected by the wind shield otherwise). I often tend to turn it off and on and listen to the beep to make sure it is on, when I am heading into a storm.

Although I would have loved to buy a 24-70mm for the 6D for this chase in order to make the 6D more useful I didn’t have the budget to buy a new one and there were no used ones available that I wanted to purchase. It would have replaced the 18-135mm in that case.

The next “upgrade” will probably be the most useful one. That is, upgrading my skills as a photographer! Still, the main reasons why some photos turn out like crap is that I do mistakes as a photographer. Sometimes, I forget about a setting (manual focus messed up some possibly great photos in Canadian, TX, 2015) and sometimes I lose focus and forget about framing the photo well (as in the amazing storm structure of Greensburg, KS, 2017).

I am embarrassed to say this as well (especially considering the camera nerd I have become) that I still shoot in Av mode, and not Manual mode. I do try to shoot Manual when there is time but I am always nervous about messing up the shot when the time is limited (and it very often is when a tornado is on the ground) so I shoot semi-automatic. My aim for this season is to change this and commit to shooting Manual and improve as a photographer!

Stay tuned and see the results here in the upcoming two weeks. If you haven’t already, check out my Instagram @stormchasingusa to see my best shots.