Yesterday we (well, mostly David) did a thorough forecast for today and, just like most others, came up with eastern or northeastern Nebraska as our target area for the day. The moisture was excellent, the shear was good, the CAPE was ok and there seemed to be enough lift. Our only worry was the lack of cap. Our hopes were moderate for the chase but it definitely showed great potential. SPC had an Enhanced Risk with 5% tornado risk in the morning when we got up early at 5.00 A.M..

While driving north our target area started to look better and better in terms of reports from SPC. We suddenly found ourselves going for a Tornado Watched area with a 10% hatched tornado risk! It felt like we could be going for a tornado outbreak day! Once again (lesson not learned) I started thinking about whether it was merely a question of how many tornadoes that would touch down in the area rather than if there would be tornadoes. 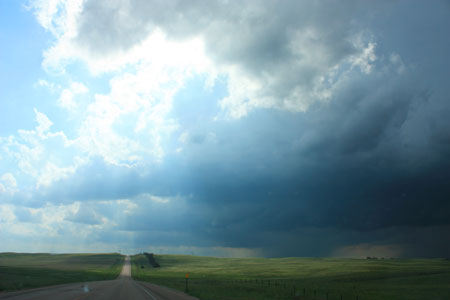 We arrived perfect in time at Norfolk, NE, to see the first storms appear on radar at around 4.45 P.M.. The first one was only some 20 minutes away so we headed there quickly. Since our worry was the lack of cap we were glad to see there were hardly any other storms around. We got under the storm, which already had a wall cloud. The wall cloud showed slight rotation and some signs of starting to form a funnel. We were perfect in timing and position!

Just as too many days this season for me, that turned out to be the highlight of the day. The storm did not produce a tornado and soon there were storms starting everywhere around us into a cluster. Although we stayed with our primary target for a while it was getting its inflow cut off by southerly storms and started to die off.

We regrouped, went through some torrential rain but found ourselves nowhere near anything interesting. The reports from SPC said that the shear would increase a lot around 9 P.M. so even though that was just after sunset we stayed to see if it would help the storms, but it did not.

So, for the 598th time this season I experienced the emotional roller coaster based on exciting SPC forecasts turning into nothing. One would think that I learned my lesson in Wyoming but obviously not. Hopefully, with two failed 10% risk days I will not get to jacked up next time. With great help from David I will hopefully become better at forecasting and create my own opinion about the outlook of the day! After all, the day turned out pretty much according to our forecast.

Even though the storms proved to be bad for chasing we actually had quite a fun day in the car. While chasing on tours paying several hundred of dollars per day I was often really stressed and frustrated these kind of days. Chasing with David, however, was simply fun with good conversations, goofing around and laughing about the situation instead.

After we were done chasing, we were not very happy to hear that the entire region was booked out due to some ballgame tournament, weekend visitors, and storm chasers. We had to drive two more hours to Omaha before we could find a room, some 17 hours after we got up this morning – driving almost constantly!