The best target for the day was probably Illinois but we needed to get back to Tulsa in order not to stress back the day after. So, we conveniently picked north central Kansas instead. It had decent CAPE, good moisture but the shear was not great. Northwestern Kansas looked a little bit better but going a couple of hours west (and then back) for just slightly better storms just did not seem all that attractive.

Our expectations of the day was not to really have a chase day but to perhaps see something interesting on our way home without diverging too much from our route. In our area Osborne, KS, seemed like the best spot so we stopped near an abandoned house in a beautiful environment underneath the cumulus field.

The lift from the cold front and the boundary layer came through and started pushing the cumulus into towers pretty much right above us. We were literally in the square mile where the towering was taking place! All towers died off within 5-10 minutes but it was nice to see and I got some nice time-lapse videos of it.

With the very meager chances of real storms to form we were happy with what we got. When we actually found a speckle of green on the radar we chased it as it was a tornado warned storm, kind of in a sarcastic way. We had a lot of fun doing so and when we saw the rain we decided to get under it, just for fun. That was pretty much how low we had sunk in our expectations and how goofy we felt about the whole chase.

Having a very Reed Timmer-esque sarcastic/goofy chase on this puny little rain cloud was a lot of fun and we followed it onto a gravel road which turned into a real Kansas black dirt road after about a mile. It only took me some 30-40 feet to realize we were in trouble. It felt like the minute we stopped we would be completely stuck in this sticky, super slippery mud so all I could do was try to get up on the little hill in front of us, trying to go as straight as possible.

Finally, the car stopped anyway but I actually managed to reverse the car and start going back. At this point we were getting quite a lot of rain on top of us so it was very difficult to see where I was driving. I kept driving in reverse and managed to stay on the road until we were about 30 feet away from the sturdy gravel road. That’s when the right front tire got too for out towards the ditch and we had to stop. We were stuck. 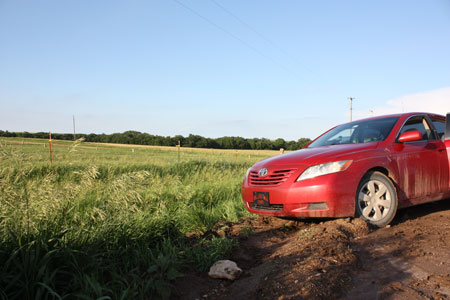 The irony was not lost on us. We had literally been chasing a rain storm and managed to get stuck in the mud. Obviously, it was not our proudest moment!

After letting the rain cloud pass over us I left to try to find some help. Running back towards the main road I stopped to take some photos of the rain cloud that ironically had turned into a proper thunderstorm! I was lucky to immediately find some local Kansas farmers to which I explained the situation and they drove over to the car.

His first words when we arrived to the scene was: “How stupid are you!? Driving on a dirt road with a car like that! Damn city slickers!”. “Pretty stupid” I admitted while they reluctantly agreed to help us out. We could not find anywhere to attach the chain to the car so we had to give up our attempts and instead call the local towing service. “It aint gonna be cheap, I can tell ‘ye that!” was his last words.

The farmers were obviously right and I had now learned the lesson that many storm chasers do at one point. I have heard about the dirt roads and how to avoid them while chasing but still… I have been driving on several dirt roads while chasing on tours and hundreds of different dirt roads in Sweden without thinking twice about it. I now understood the full extent of how bad the Midwestern dirt roads actually could be! 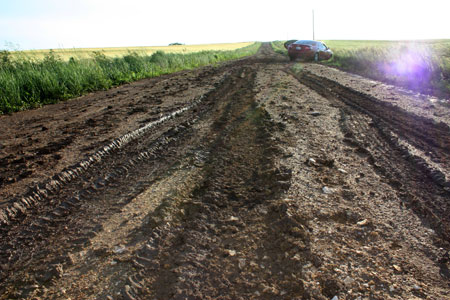 So, we were stuck again but with a tow truck coming to help us for $300 within 45 minutes. The $30o felt excessive but we really had no good options and we could have been far, far worse off. It was a beautiful sunny day and we had gotten stuck in an really picturesque spot among the wheat fields but most interesting of all. Our rain cloud had turned into a supercell! 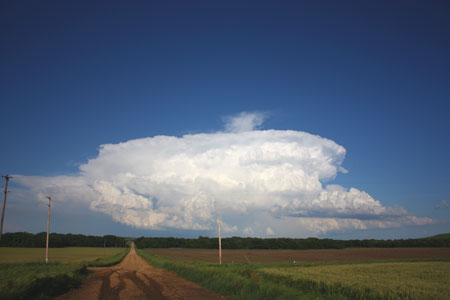 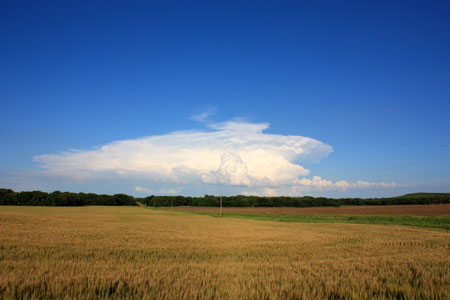 Basically, while waiting for the tow truck we could watch the storm grow into an incredible supercell on a completely blue sky. It was stunning! We could even see portions of the base and a wall cloud while it was drifting off. The sun was shining, we could watch some incredible storm structure, our spirits were quite high and the tow truck was on its way. The lesson was learned and even if it cost us $300 we could have learned this lesson with a tornadic storm coming our way as well!

Eventually the tow truck came and got us out of our mess and we continued our way back home. The storm was dying off pretty much the minute we left but we could follow it all the way to Salina doing some passive storm chasing.

This was my last day of chasing this season and it could have gone into the books as a complete disaster but it felt like quite the opposite. Sure, we lost $300 but we learned a good lesson, had a lot of fun and actually managed to see the nice storm structure I had been longing to see ever since I got here two weeks ago.