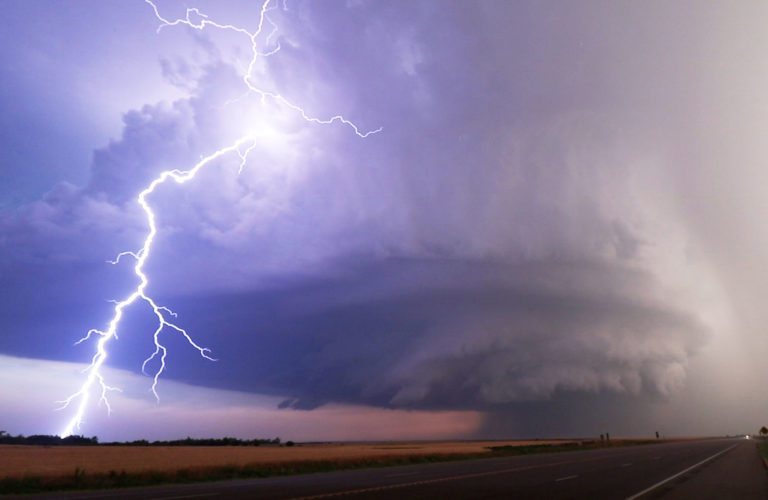 Today was our “Well, we can chase if there are any storms around Tulsa”-day, since we were all leaving around noon the day after. Although there was a chance for some sort of thunderstorms in Tulsa, the environment was best in north-east Kansas. We could not, however, risk being so far away from Tulsa so we chose the south central Kansas-target and sat down at Starbucks in Wichita. Oh, the amount of hours we have spent at different Starbucks this trip. Strong coffee and free Wifi attracts storm chasers as moskitos to a pair of legs on a Kansas country road at dusk!

I was quite busy going through all the photos from the day before and did not really mind the wait. Although the environment was not really tornadic I did not have great hopes, but the lesson learned from yesterday was to never give up so…we chased.

Finally, two storm complexes started firing. One around Salina (the northern target) and one around Pratt. The northern one clinged onto a boundary and really felt like the main target but we had no real option due to our flights so we had to choose the southern target and yet again bet on the outlier. I was feeling a bit uncomfortable hearing reports on the northern cell, thinking of the Big Chapman Miss last year.

Our cell looked good though but seemed to die off in an outflow burst some 30 minutes into our stop around between Pratt and Greensburg. It did re-organize and presented an intense lightning show for us, with an amount of positive lightning I have never before seen during daylight. It was impressive! One lightning under the meso started a fire causing smoke to go up into the updraft.

The storm shaped a perfect looking wall cloud with a tail cloud but did not really rotate much. As it was almost stationary we could just stand and watch it, so it was very pleasant. As it finally moved though, we were in for a treat of a lifetime.

We were quite limited to what we could chase since our 4WD was out and it was starting to get dark. We did not want to end up in the same situation as yesterday! So, we went for the structure shots and stopped on Highway 400. And, oh boy, what a structure! The supercell rotated rapidly and presented the most amazing storm structure I have seen in 7 seasons of chasing. It was like out of a photo book! Wow!

We could not follow it south over Greensburg due to the risk of tornadoes, the heavy rain and the dark so we decided to end of a positive note and head back to Tulsa. We drove through the MCS (stemming from the northern target) on our way back there and got back some time after 2 a.m. with a good mood and not too tired. My last thunderstorm of the trip woke me up at 6 a.m. and I spent a couple of minutes looking and listening before I fell back to sleep with a smile on my face.