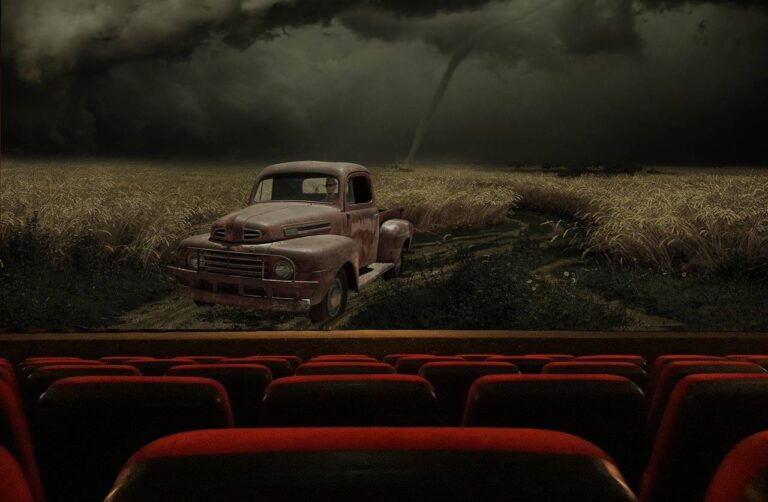 Note: The image is NOT a scene from any of the movies mentioned but rather just some photo editing.

Although tornadoes are frequent in movies they are often pictured more as a backdrop to enhance a disaster movie or the likes of it. The storm chasing community has not been spoiled with great movies – or even movies – related to storm chasing with The one exception: Twister (1996).

The last storm chasing related movie to hit the theatres was “Into the Storm” (2014), which was unbearable to watch in between the tornado scenes – but those tornado scenes were really cool to be honest.

It seems now that we are being treated with a new storm chasing movie: “Supercell“, starring Alec Baldwin, Anne Heche etc and directed by rookie director Herbert James Winterstern. The production company Highland Film Group describes the plot as:

William (Daniel Diemer), a good-hearted teenager, always lived in hopes of following in his fatherâ€™s footsteps, the legendary storm chaser Bill Brody, killed by a massive super tornado. A mysterious package of his fatherâ€™s old journals sparks William to run away from his still-grieving mother, Quinn (Anne Heche). His fatherâ€™s legacy has now been turned into a thrilling storm-chasing tourist business, managed by the greedy and reckless Zane Rogers (Alec Baldwin). William takes the lead on a storm chase with his dadâ€™s old partner Roy (Skeet Ulrich), but the tornadoes have only gotten bigger and Zane pushes his clients toward the heart of the uber destructive storms. Williamâ€™s mother anxiously searches for her son to save him from the beast that killed his father not knowing that Zane is now using William, son of the great Bill Brody, as a tourist attraction and leads the group deep into the eye of the most dangerous supercell ever seen.

‘Supercell’ is in post-production at the moment with no words on when (or if) it will hit the movie theaters, but I would hope and expect at least in 2022. ‘Supercell’ has supposedly been filmed (partially) in Montana which would probably mean some really nice scenery!

I don’t have much hope and expectations after ‘Into the storm’ but with actors like Alec Baldwin and Anne Heche, it should not be a total disaster – I hope!

Other tornado movies to come: ’13 minutes’ and ‘Falling to Earth’

Outside of ‘Supercell’ there is also a new tornado movie, ’13 minutes’ coming out on October 29th. The movie follows the residents in a small town with the largest tornado on record approaching the town – with only 13 minutes to seek shelter. From the look in this article, at least the special effects looks really great! There is not much information about it but hopefully there will be a trailer coming up soon.

Another movie in which a tornado has a major role is ‘Falling to Earth‘ starring Ben Affleck based on the novel by Kate Southwood. Falling to earth starts with a tornado wiping out most of a small town, where one family is spared completely. In the aftermath they have to face the increasing resentment of their neighbors for being the only ones who have not lost anything.