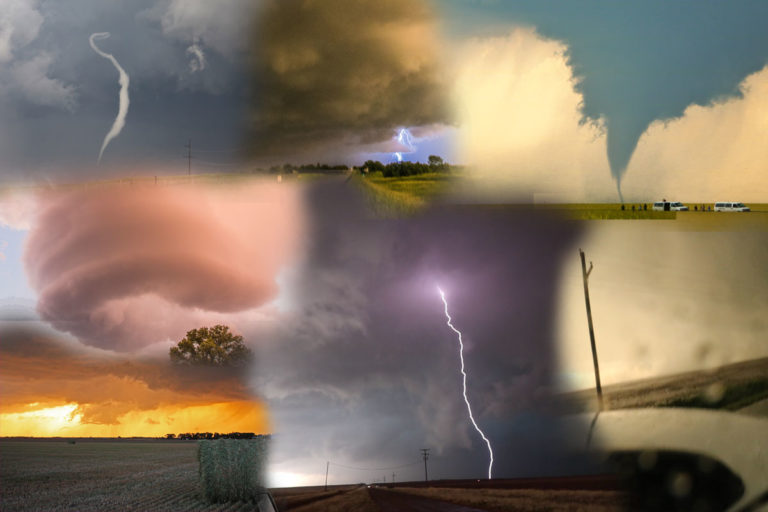 This season will not be my 10th but it has been 10 years since I started chasing. In fact, when I leave on June 5th it will be the 10 year anniversary of my first tornado. As a tribute to this I decided to share my 10 most memorable storm chasing moments ever.

My first chase was in 2009 and on our 3rd day we caught our first supercell in Canadian, TX. I had no real clue on what to expect but driving through town, under the base of that massive storm with clouds so low it felt like they would touch the roof of our car made a profound impact on me. I thought tornadoes would come out of everywhere any second. It was intense and although I have done it 100 times afterwards, that feeling somewhat remains every time.

We had a down day in 2017 and decided to head up to the Rockies for some sight-seeing. We knew there would be some small thunderstorms coming in and stopped and looked at them, trying to get some lightning photos. My chase partner David took several in an attempt to get something – and, did he! When we got back for lunch he went through his photos and discovered a tornado in one of those photos! No one, including David, did in fact SEE the tornado but it was caught on camera. In the end this was quite frustrating, as the sight (and additional photos) would have made a #1 on this list but this event with a tornado at 11.000 ft is still something to remember. 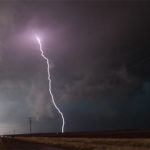 The first chase week of 2016 was the best I have ever had, and possibly ever will have. We chased down in Plaska, TX, one of these days and although we encountered 4 tornadoes that day what I remember the most that day was the lightning. I have seen positive lightning before and after that day but these lightning bolts came down as Poles of Pure Fury. They shook the ground and shook the car we were sitting in. The power of lightning has never been as tangible as on that day. 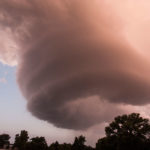 My most memorable moments are usually a matter of being positively surprised by the outcome of a day. This day in 2017 we had given up on chasing that day and went to Wichita to our hotel. We noticed a tiny storm that was lingering west of Wichita while driving towards the city. It grew and was eventually a supercell when we arrived at dusk. The sun hit it in a way that this rotating LP storm turned completely pink. It looked like a pig snout in the sky. We continued chasing the storms in the area and ended u watching a dying storm outside Mulvane, KS, with a star lit sky all around us with fireflies everywhere. It was the most calm and beautiful thing I have ever experienced while chasing. 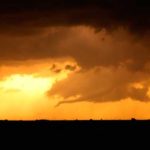 My second chase ever was in 2012 and we were driving EVERYWHERE and saw nothing but rain and weak thunderstorms. Our last day did not look promising either, especially since we had to go home. We were lucky though as the situation changed for the better, and the target area in Kansas was on our path to go back home to Oklahoma. As we were driving towards our target area it just became better and better. Still, the supercell took its sweet time. Just before sunset we were rewarded with a stunning orange tornado – and it felt like scoring a goal in the last second in football.

5. Getting caught in a supercell at night in Nebraska (2017)

Only two days after that amazing pink horseshoe supercell day in Kansas we went chasing in Nebraska. It was a day in which a bit of lower LCL would have given us some incredible white tornadoes but everything stopped at funnels. While giving one last attempt we got caught inside the storm while our Toyota started having problems with the 4WD. Eventually, we came in too deep and the radar started showing rotation couplets everywhere around our truck. Suddenly we ended up in what could have been the inflow jet of a tornado and we couldn’t see anything in the dark! David, who was inside the El Reno tornado, described this as being the scariest storm situation he had ever been in. 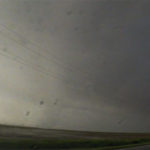 The Leoti, KS; supercell of 2016 is remembered by many for having an incredible structure. It was THE storm structure of 2016. Still, it had two brief tornadoes. We missed the first one but caught the other one – a bit too close. My tour guide Erik Burns saw it a few hundred yards left of the road and we stopped to determine its path and take a few photos. Then it suddenly turned and headed straight to our broad side. I still remember watching the rotation out through the passenger door! We speeded away and drove out of its path just 5-10 seconds before it went over the position we just had been in. What makes this extra amazing is the video coverage of the event. I filmed it, the car behind us filmed us escaping and another van filmed us from the other direction. 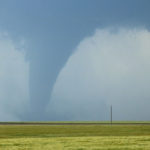 My best chase day ever for me and for many other storm chasers was Dodge City, 2016. It was just perfect. Perfect visibility, no casualties, several twin tornadoes, tornadoes of all sizes and shapes. This storm had everything I had ever dreamt of seeing. All neatly packaged and easily accessed. If I had to pick one moment from this day it has to be the moment I realized there were 3-4 separate funnels on the ground at the same time. 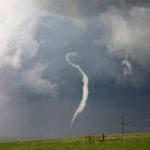 My first tornado was the Goshen County, WY, tornado of 2009 – and it was like losing your virginity to a super model. It was a spectacular, high contrast, white, eventually lasso-shaped tornado in a beautiful surrounding. In addition, it was my first. When the funnel stretched all the way down and became a tornado it was a dream coming true. I couldn’t believe I was seeing what I was seeing – and it just got better and better with a sensational rope-out stage.

About an hour after the #6 on this list, the sunset tornado of Lacrosse, KS, we were done for the day. Our cameras were packed, I don’t think anyone paid any real attention to the radar and we were heading home – knowing we would arrive extremely late to our hotel in Oklahoma. While driving home we drove through the storm systems we had been chasing and I was looking out through the window, with my focus a mile away out on the fields, where there could possibly get to be a tornado. It was completely dark but frequent lightning constantly lit up the sky. After a few minutes something caught the corner of my eye. In my mind I replayed what I had seen and did not dare to believe it. The next lightning strike confirmed what I thought I had seen – a tornado that was just on top of us, but tilted in a way that the base was just above us, but the ground contact somewhere close but impossible to see. I remember that elephant trunk funnel today, just as clearly as when it happened. A few years later I found photos of that tornado and realized we had not just been driving underneath that tornado but passed another one only minutes before!

For me, storm chasing, is all about the memories, the stories and the photos I get to bring back home. It is not always about the tornadoes but often about the surprises and the spectacular events you get to experience. I had a hard time boiling my memories down to a top-10 list and excluding experiences such as chasing with “Outlaw chasers” in 2015, seeing a full freight train as well as two semis being blown to the side in 2017, the spectacular storm structure on our last day in 2017, watching grape sized hail in Missouri 2009, seeing three tornadoes from the same storm in Cope, CO, 2018, seeing a funnel getting sucked up in another updraft to the shape of a horse-shoe in 2017 or seeing my first satellite tornado in Canadian, TX, 2015.

I am incredibly grateful to have experienced all this and I hope I will have more memories to come and push its way into the top of this list!